Shoemaker and his Daughter

'O'Clery takes us into the hidden heart of Soviet Russia... An arresting and evocative story.' Keggie Carew, author of Dadland 'A tour de force ... Love, politics, murder, wars, and the fracturing of ties, personal and ethnic. O'Clery is a gifted writer.' Luke Harding, bestselling author of Collusion The Soviet Union, 1962. Gifted shoemaker Stanislav Suvorov is imprisoned for five years. His crime? Selling his car for a profit. On his release, social shame drives him and his family into voluntary exile in Siberia, 5,000 kilometres from home. In a climate that's unfriendly both geographically and politically, it's their chance to start again. The Shoemaker and His Daughter is an epic story spanning the Second World War to the fall of the Soviet Union, taking in eighty years of Soviet and Russian history, from Stalin to Putin. Following the footsteps of a remarkable family Conor O'Clery knows well - he is married to the shoemaker's daughter - it's both a compelling insight into life in a secretive world at a siesmic moment in time and a powerful tale of ordinary lives shaped by extraordinary times. 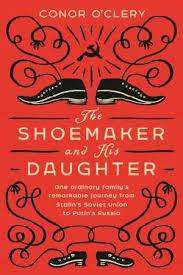 Paperback
Shoemaker and his Daughter also appears in these Categories: