Siege and Storm: The Grisha: Book 2

Enter the Grishaverse with Book Two of the Shadow and Bone Trilogy by the number one New York Times-bestselling author of Six of Crows and Crooked Kingdom.

Alina Starkov's power has grown, but not without a price. She is the Sun Summoner - hunted across the True Sea, haunted by the lives she took on the Shadow Fold. But she and Mal can't outrun their enemies for long.

The Darkling is more determined than ever to claim Alina's magic and use it to take the Ravkan throne. With nowhere else to turn, Alina enlists the help of an infamous privateer and sets out to lead the Grisha army.

But as the truth of Alina's destiny unfolds, she slips deeper into the Darkling's deadly game of forbidden magic, and further away from her humanity. To save her country, Alina will have to choose between her power and the love she thought would always be her shelter. No victory can come without sacrifice - and only she can face the oncoming storm.

"There's a level of emotional and historical sophistication within Bardugo's original epic fantasy that sets it apart." Vanity Fair

"Unlike anything I've ever read." Veronica Roth, bestselling author of Divergent 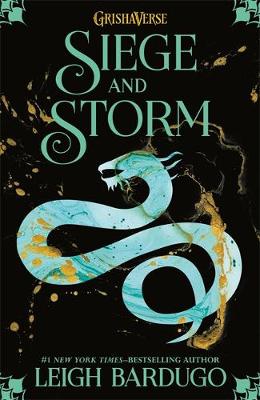 20% offPaperback
Siege and Storm: The Grisha: Book 2 also appears in these Categories:

20% off
Ballad of Songbirds and Snakes (A Hunger Games Novel)
Suzanne Collins
Paperback
€9.00

20% off
Aristotle and Dante Discover the Secrets of the Universe
Benjamin Alire Saenz
Paperback
€9.00

20% off
Daughter of the Siren Queen
Tricia Levenseller
Paperback
€9.00

20% off
Lucy Clark Will Not Apologize
Margo Rabb
Paperback
€7.99

20% off
This Place is Still Beautiful
XiXi Tian
Paperback
€7.99

36% off
Nick and Charlie (A Solitaire novella)
Alice Oseman
Paperback
€7.19

36% off
This Winter (A Solitaire novella)
Alice Oseman
Paperback
€7.19