From one of the world's leading economists, a sweeping new history of the twentieth century - a century that left us vastly richer, yet still profoundly dissatisfied.

Slouching Towards Utopia tells the story of the major economic and technological shifts of the 20th century in a bold and ambitious, grand narrative. In vivid and compelling detail, DeLong charts the unprecedented explosion of material wealth after 1870 which transformed living standards around the world, freeing humanity from centuries of poverty, but paradoxically has left us now with unprecedented inequality, global warming, and widespread dissatisfaction with the status quo.

How did the twentieth century fail to deliver the utopia our ancestors believed would be the inevitable result of such material wellbeing? How did humanity end up less on a march to progress than a slouch in the right direction? And what can we learn from the past in pursuit of a better world? 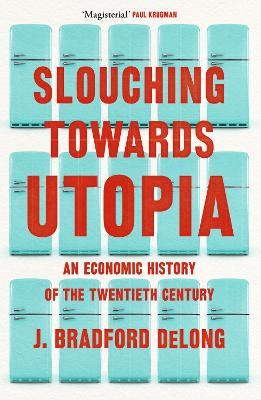 Hardback
Slouching Towards Utopia also appears in these Categories:

Elon Musk: How The Billionaire Ceo Of Spacex And Tesla Is Shaping Our Future
Ashlee Vance
Paperback
€13.75

Principles: Your Guided Journal: Create Your Own Principles to Get the Work and
Ray Dalio
Hardback
€22.99

Figuring Out The Past: A History of the World in 3,495 Vital Statistics
Peter Turchin
Paperback
€13.75

Values: An Economist's Guide to Everything That Matters
Mark Carney
Paperback
€13.75