Soldiers We Will Be

Included in this book's 192 pages of military history are over 400 photographs, some unique of the Civil War, Emergency Period and the author's own photos taken of FCA days in Kerry from 1960s to 2003, including Colonel Leo Quinlans Lecture The Siege of Jadotville in Listowel 2017 & 100th Anniversary WW1 Listowel 2018.
This book is about Soldiers that answered various military calls in the period. It is presented without judgement or reason for becoming a soldier, but Michael hopes that the reader will get a better understanding of the motivations behind soldiering and the life of a soldier.


Information includes: Wolfe Tones retreat to the Shannon Estuary on a French ship in 1796 The British response in fortifying the Shannon Estuary during the Napoleonic period Military History from Church of Ireland records  The story of Horatio Kitchener and Those that answered his call to arms WW1 The War of Independence & the Civil war in North Kerry The Emergency 1939 to FCA Days in Kerry The Building of Fort Shannon 1942 (near Tarbert) Using material researched from contemporary sources, step by step we witnessed the unfolding drama and birth pangs of Irelands nationhood Military History researched over many years. 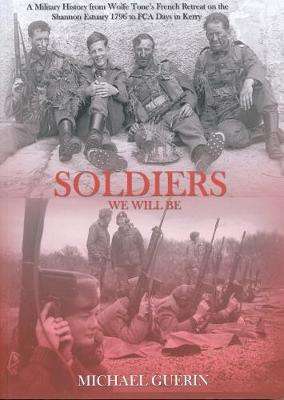 Paperback
Soldiers We Will Be also appears in these Categories:

The Intelligence War against the IRA
Thomas Leahy
€23.15