Starvation Heights: The chilling true story of the doctor who starved her patien

All that was left of Doctor Linda Hazzard's sanitorium was the foundation and the masonry incinerator that swelled from the ground like a huge grave marker. A perfect row of old firs and pines lined up like sentinels along the road. Every one of the trees marked the spot where the doctor had buried each of her victims. In 1911 two wealthy British heiresses, Claire, and Dora Williamson, arrived at an unfinished sanitorium in the forests of Olalla, Washington to undergo the revolutionary "fasting treatment" of Doctor Linda Burfield Hazzard. It was supposed to be a holiday for the two sisters, but within a month of arriving at what the locals called 'Starvation Heights', the women underwent brutal, evasive procedures and became emaciated shadows of their former selves. How did Hazzard persuade the sisters to undergo such monstrous treatments? And why, on Claire's deathbed, did Dora, near to death herself, still hold such an extreme belief in Hazzard's methods? In this chilling true story of deception and murder, Gregg Olsen brings us inside the disturbing world of Hazzard who would stop at nothing to achieve her dream of creating the most renowned sanatorium in the world - but ended up a convicted serial killer. A gripping and fascinating account of the most unusual and disturbing criminal cases in American history that will hook fans of The Five and The Devil in the White City. What readers are saying about Starvation Heights: "A fascinating turn-of-the-century story of medical malpractice and murder. If you liked The Alienist, you'll find Starvation Heights all the more gripping because this story is true." Michael Connelly "An engrossing and compelling look at a shocking crime in another era. Olsen's deft touch takes us back to the early 1900s so cleverly that reading Starvation Heights is akin to stepping into a time machine." Ann Rule "Even the most devoted true-crime reader will be shocked by the maddening and mind-boggling acts of horror that Gregg Olsen chronicles in this book. Olsen has done it again, giving readers a glimpse into a murderous duo that's so chilling, it will have your head spinning. I could not put this book down!" Aphrodite Jones, New York Times bestselling author "One of today's true-crime masters." Caitlin Rother, New York Times bestselling author "An account of real-life villainy that outdoes anything a novelist might concoct." Les Standiford, author of Meet You in Hell 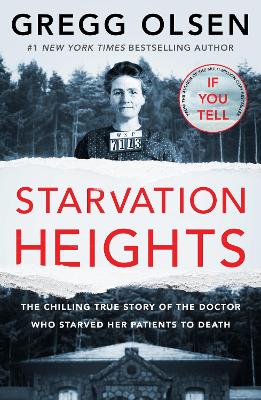 Paperback
Starvation Heights: The chilling true story of the doctor who starved her patien also appears in these Categories:

Murder at Home: how our safest space is where we're most in danger
David Wilson
Trade Paperback
€18.75

The Snakehead: An Epic Tale of the Chinatown Underworld and the American Dream
Patrick Radden Keefe
Paperback
€13.75

What Lies Beneath
Peter Faulding
Hardback
€23.75

I Know Who You Are
Barbara Rae-Venter
Hardback
€26.25