The legends of King Arthur are among the richest and most mysterious in British folklore, and they remain popular throughout the world. There almost certainly was a real leader named Arthur, who was probably a clan chieftain from Cornwall, Wales or Scotland. The Arthurian myths deal with important and timeless themes, such as temptation, betrayal, justice and the struggle for power. It is therefore not surprising that stories of this mighty Celtic warrior echo through the ages, making him a hero for our own time as much as his own. The ten featured tales include all the memorable characters such as Uther Pendragon, Queen Guinevere, Gawain, Lancelot, Morgana and Mordred, plus well- known places such as Tintagel and Camelot, the mythical site of the Round Table. Learn about Arthur's birth, the fate foretold for him by the wizard Merlin, the sword in the stone, the lady in the lake, and the devastating final battle. Powerful and dramatic illustrations by Graham Howells bring the heroism and treachery of Arthur's turbulent time vividly to life 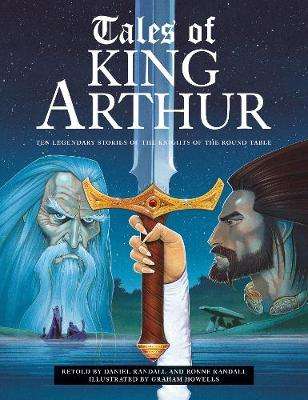 Hardback
Tales of King Arthur also appears in these Categories:

When Jelly Had a Wobble (PB)
Michelle Robinson

You Live Where?!
Garry Parsons

I Love My Mummy
Giles Andreae

Ned and the Great Garden Hamster Race: a story about kindness
Kim Hillyard
€8.40

I Used to Be a Fish: The Story of Evolution
Tom Sullivan
€8.40