Three couples. One weekend. Everything is about to change... A sparkling and spellbinding novel from Number One bestselling author Roisin Meaney Lily and Charlie separated after twenty-six years of marriage. Now, with their divorce due to come through in a matter of months, Lily, newly engaged to the dependable Joe, decides to get the whole family together for one last weekend at Land's End, their old summer home by the sea. Lily has to break some news to Charlie, her daughter Poll and son Thomas -- news she knows they're not going to be happy about. But as the family makes their way to Land's End with their new partners, Lily's best laid plans are about to go awry. As Charlie's much younger girlfriend Chloe guards her own secret, Poll seems intent on sabotaging her apparently perfect relationship, while Thomas wrestles with a decision he knows could break his family apart. And amid the drama, they've forgotten that this weekend also just happens to be Lily and Charlie's wedding anniversary ... Will all the couples survive the weekend intact? 'Just about everything in this good-humoured book will keep you engrossed and in for a satisfying surprise at the end' Irish Independent 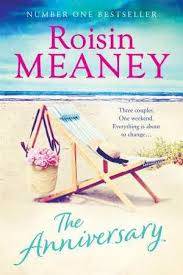 Paperback
The Anniversary also appears in these Categories: