The Burgundians: A Vanished Empire

A masterful history of the great dynasty of the Netherlands' Middle Ages. 'A sumptuous feast of a book' The Times, Books of the Year 'Thrillingly colourful and entertaining' Sunday Times 'A thrilling narrative of the brutal dazzlingly rich wildly ambitious duchy' Simon Sebag Montefiore 5 stars! Daily Telegraph 'A masterpiece' De Morgen 'A history book that reads like a thriller' Le Soir At the end of the fifteenth century, Burgundy was extinguished as an independent state. It had been a fabulously wealthy, turbulent region situated between France and Germany, with close links to the English kingdom. Torn apart by the dynastic struggles of early modern Europe, this extraordinary realm vanished from the map. But it became the cradle of what we now know as the Low Countries, modern Belgium and the Netherlands. This is the story of a thousand years, a compulsively readable narrative history of ambitious aristocrats, family dysfunction, treachery, savage battles, luxury and madness. It is about the decline of knightly ideals and the awakening of individualism and of cities, the struggle for dominance in the heart of northern Europe, bloody military campaigns and fatally bad marriages. It is also a remarkable cultural history, of great art and architecture and music emerging despite the violence and the chaos of the tension between rival dynasties. 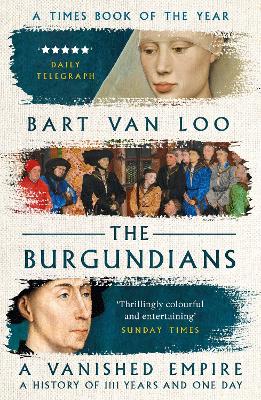 Paperback
The Burgundians: A Vanished Empire also appears in these Categories:

Legacy of Violence: A History of the British Empire
Caroline Elkins
Hardback
€37.50

12% off
Guru, the Bagman and the Sceptic
Seamus O'Mahony
Trade Paperback
€21.99

East West Street: On The Origins Of Genocide And Crimes Against Humanity
Philippe Sands
Paperback
€12.50

The Last Emperor of Mexico: A Disaster in the New World
Edward Shawcross
Paperback
€16.25

The Shape of Battle: Six Campaigns from Hastings to Helmand
Allan Mallinson
Paperback
€13.75

The War of Nerves: Inside the Cold War Mind
Martin Sixsmith
Paperback
€16.25

The Afghanistan Papers: A Secret History of the War
Craig Whitlock
Paperback
€16.25