A gripping, elegant mystery steeped in the atmosphere of London  from the hushed streets of Mayfair to the backstreet pubs of the East End to the bustle of Soho  The Cuckoos Calling is a remarkable book. Introducing Cormoran Strike, this is the acclaimed first crime novel by J.K. Rowling, writing under the pseudonym Robert Galbraith.

When a troubled model falls to her death from a Mayfair balcony, it is assumed that she has committed suicide. However, her brother has his doubts and calls in private detective Cormoran Strike to investigate. Strike is a war veteran - wounded both physically and psychologically - and his private life is in disarray. The case gives him a financial lifeline but it comes at a personal cost: the more he delves into the young model's world, the darker things become and the closer he gets to terrible danger... 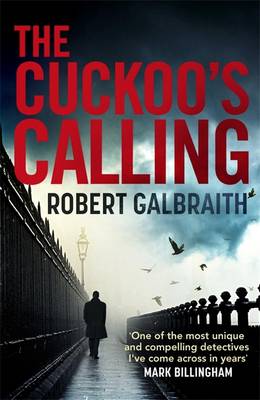 The Last Thing He Told Me
Laura Dave
Paperback
€10.99

The Missing Ones
Patricia Gibney
Paperback
€11.10

20% off
The Nightingale
Kristin Hannah
Paperback
€8.99