The Grapes of Wrath

Shocking and controversial when it was first published in 1939, Steinbeck's Pulitzer prize-winning epic remains his undisputed masterpiece. Set against the background of dust bowl Oklahoma and Californian migrant life, it tells of the Joad family, who, like thousands of others, are forced to travel West in search of the promised land. Their story is one of false hopes, thwarted desires and broken dreams, yet out of their suffering Steinbeck created a drama that is intensely human, yet majestic in its scale and moral vision; an eloquent tribute to the endurance and dignity of the human spirit. 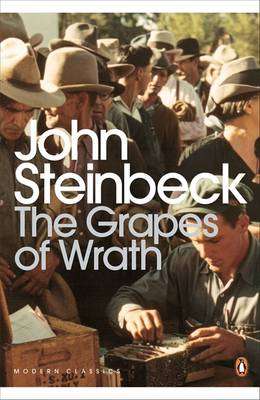 Paperback
The Grapes of Wrath also appears in these Categories:

Frankenstein: or `The Modern Prometheus': The 1818 Text
Mary Wollstonecraft Shelley
€7.50

A Room of One's Own and Three Guineas
Virginia Woolf
€2.99