'The Garda Siochana will succeed, not by force of arms or numbers, but on their moral authority as servants of the people.' Michael Staines, the first Commissioner of An Garda Siochana, 1922 The Guardians: 100 Years of An Garda Siochana, 1922-2022 takes readers from the first generation of the Civic Guard/Garda Siochana, through the 1950s and 1960s, and up to the modern policing service provided by An Garda Siochana in 21st-century Ireland. Formed in the turbulent period between the War of Independence and the Civil War, An Garda Siochana had been tasked with restoring law and order in the new Irish Free State. A century later, with the evolution of crime and following major societal changes, policing faces new challenges in a very different Ireland. Nevertheless, 'the guardians of the peace' retain their commitment to serving the Irish people and keeping them safe. Compiled by Garda Stephen Moore in conjunction with The Guardians Editorial Board on behalf of An Garda Siochana, these collected essays include individual and personal stories of gardai past and present. Combined with accounts by historians and academics, they provide a unique insight into policing in Ireland over the past hundred years. Richly illustrated with historical and contemporary photographs, this is the official book of An Garda Siochana in its centenary year. 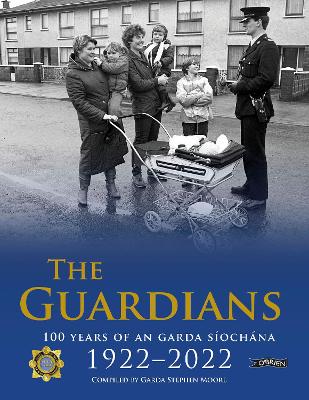 20% off
The Good Nurse: A True Story of Medicine, Madness and Murder
Charles Graeber
Paperback
€10.00

20% off
Dead in the Water
Matthew Campbell
Trade Paperback
€15.00

20% off
The Yank: My Life as a Former US Marine in the IRA
John Crawley
Trade Paperback
€13.56

20% off
Nothing But The Truth: Stories of Crime, Guilt and the Loss of Innocence
The Secret Barrister
Trade Paperback
€15.00

20% off
Redhanded: An Exploration of Criminals, Cannibals, Cults, and What Makes a Kille
Suruthi Bala
Trade Paperback
€14.00

20% off
The Murder of Mr Moonlight
Catherine Fegan
Paperback
€9.00

20% off
Catch and Kill: Lies, Spies and a Conspiracy to Protect Predators
Ronan Farrow
Paperback
€11.00

20% off
Starvation Heights: The chilling true story of the doctor who starved her patien
Gregg Olsen
Paperback
€9.00

20% off
The Corner: A Year in the Life of an Inner-City Neighbourhood
David Simon
Paperback
€13.00

36% off
There's Been a Little Incident
Alice Ryan
Trade Paperback