Shortlisted for the An Post Irish Book Awards Bord Gáis Energy Sports Book of the Year Award for 2018.

In 1882, a letter was published in the Irish Times, lamenting the decline of hurling. The game was now played only in a few isolated rural pockets, and according to no fixed set of rules. It would have been absurd to imagine that, within five years, an all-Ireland hurling championship would be underway, under the auspices of a powerful national organization. The Hurlers is a superbly readable account of that dramatic turn of events, of the colourful men who made it happen, and of the political intrigues and violent rows that marked the early years of the GAA. From the very start, republican and ecclesiastical interests jockeyed for control, along with a small core of enthusiasts who were just in it for the sport. In this authoritative and seriously entertaning book, Paul Rouse shows how sport, culture and politics swirled together in a heady, often chaotic mix. 'Fascinating ... a brilliantly researched book on hurling in the early years of the GAA' Martin Breheny, Irish Independent 'I heartily recommend it. Great picture of the emergence of modern Ireland amidst sport, nationalism, priests and assorted crazy hotheads ... Brilliant stuff' Dara O Briain 'A story of pioneerism, passion, intrigue, skulduggery and commitment ... a must read for the many sports, and particularly hurling, supporters and admirers in today's version of Ireland' Irish Times 'Brilliantly entertaining ... not just the gripping account of that first championship, but also of how the game of hurling itself was saved in the 1880s from what seemed certain extinction' Sunday Independent 'Terrific' Kieran Shannon, Irish Examiner 'Can't recommend this enough. Amazing detail, brilliant story telling, full sweep of Irish life in the 1880's and all the seeds and fault lines of GAA life today brought to life' Ger Gilroy 'A brilliant piece of work' Matt Cooper 'Both a sports and a history book, full of wonderful stories from a different time, with tales of passion, skullduggery and controversy, played out against the backdrop of what could be described as a civil war within the GAA and a land war that threatened to rip the country apart' RTE Culture 'Fascinating' Frank McNally, Irish Times 'A page turner that continues to deliver chapter after chapter ... The Hurlers is a must read' Limerick Leader 'A superbly readable account ... an authoritative and seriously entertaining book' Ireland's Own 'The perfect read for a brilliant hurling year' Caitriona Lally, Irish Independent Top Books of 2018 'A vital look into the early years of the GAA and a perfect gift for both sport and history lovers' Mark Gallagher, Mail on Sunday Books of 2018 'Marries forensic historical research of the cultural and political contexts for the emergence of modern hurling with a polished style and storytelling ability that is rare among historians' Diarmaid Ferriter, Irish Times Books of 2018 'Marvellous ... the definitive account of this remarkable period when hurling came to life' Clonmel Nationalist 'Brilliant' Kenny Archer, Irish News 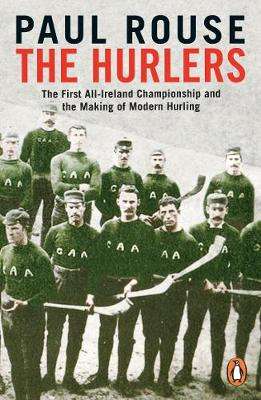 Paperback
The Hurlers also appears in these Categories:

8.5% off
Open Side: The Official Autobiography
Sam Warburton
€10.99

Surviving the Storms: Extraordinary Stories of Courage and Compassion at Sea
Rnli
€18.75