The Killing Of Father Niall Molloy: Anatomy of an Injustice

Separating fact from fiction, Anatomy of an Injustice - The Killing of Fr Niall Molloy re-examines the astonishing circumstances surrounding the death of a 52-year-old priest almost forty years ago. In July 1985, the discovery of Fr Niall Molloy's badly beaten body in the bedroom of his close friends and business associates, Richard and Therese Flynn, was the stuff of soap operas, not of a small rural village in the Irish midlands. The gentle-natured cleric came to a violent and bloody end during a weekend of extravagant wedding celebrations at the Flynn stately home, Kilcoursey House. For decades, the events of that tragic night fuelled rife speculation and gossip, as well as allegations of a cover-up by the State and Church, and today his death remains unsolved and shrouded in mystery. From an extraordinary criminal trial and acquittal, which conflicted with a subsequent inquest verdict, to a botched investigation and questions over motive, the savage beating of Fr Niall Molloy continues to beg more questions than answers. Anatomy of an Injustice - The Killing of Fr Niall Molloy builds on fresh revelations unveiled in a recent two-part TV documentary for RTE, 'The killing of Fr Niall Molloy', to detail and document the whole story before and after that fateful summer Sunday. In this new book, TV documentary producer, Sharon Lawless of Flawless Films, and Maresa Fagan, a journalist of 20 years standing, delve further into the case to test evidence, old and new, and follow the money trail. It forensically analyses all available facts and testimony given at the 1986 trial and inquest and also hears from criminal and medical experts about how Fr Molloy died and about what really might have occurred that night. This story of significant public interest also sheds light on the many injustices in the case and how the Molloy family were let down by the State and criminal justice system. 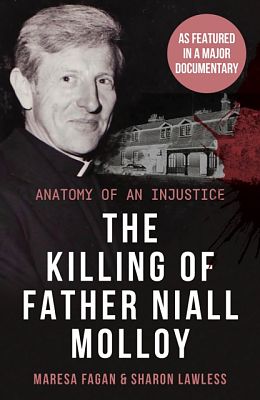 20% offPaperback
The Killing Of Father Niall Molloy: Anatomy of an Injustice also appears in these Categories:

The Yank: My Life as a Former US Marine in the IRA
John Crawley
Trade Paperback
€16.95

The Monk: The Life and Crimes of Ireland's Most Enigmatic Gang Boss
Paul Williams
Paperback
€12.50

All That is Wicked
Kate Winkler Dawson
Paperback
€18.75

The Corner: A Year in the Life of an Inner-City Neighbourhood
David Simon
Paperback
€16.25

Talking with Serial Killers: Sleeping with Psychopaths: A chilling study of the
Christopher Berry-Dee
Paperback
€11.25

After the Storm
Damian Lawlor
Paperback
€21.25