The Mystery of Mercy Close

"The Mystery of Mercy Close" by Marian Keyes sees the return of the beloved Walsh sisters in this utterly compelling, moving and very very funny novel. 'The Shovel List: a list of all the people and things I hate so much that I want to hit them in the face with a shovel.' Courageous, vulnerable and wasp-tongued, Helen Walsh doesn't believe in fear - it's just a thing invented by men to get all the money and good jobs. And yet she's sinking. Her work as a private investigator has dried up, her flat has been repossessed and some old demons have resurfaced. Hired to track down boy-band member Wayne Diffney - vanished from his house in Mercy Close - she encounters hangers on, hasbeens and wannabes. Despite playing by her own rules, Helen is drawn into a dark and glamorous world, where her worst enemy is her own head and where the only person she feels connected to is Wayne, a man she's never even met. Praise for Marian Keyes: "Hilarious, painfully realistic...Your heart wrenches. Combines depth, drama and whip-smart comedy". ("Stylist"). "Keyes' satirical eye remains as sharp as ever". ("Daily Mail"). "Clever, hilarious, poignant". ("Sunday Times"). Marian Keyes' international bestselling novels include "Rachel's Holiday", "Last Chance Saloon", "Sushi for Beginners", "Angels", "The Other Side of the Story", "Anybody Out There", "This Charming Man" and "The Brightest Star in the Sky". Two collections of her journalism, "Under the Duvet" and "Further Under the Duvet", are also available from Penguin. 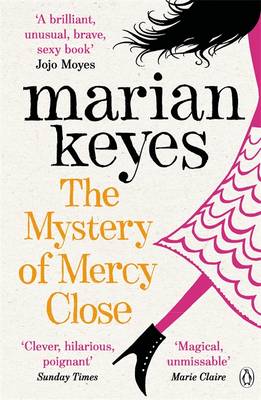 Paperback
The Mystery of Mercy Close also appears in these Categories:

All We Shall Know
Donal Ryan
Paperback
€10.95

A Line Made By Walking
Sara Baume
Paperback
€12.20

A Portrait of the Artist as a Young Man
James Joyce
Paperback
€14.60