Niall Ferguson's "The Pity of War: 1914-1918" is a provocative and boldly-conceived history that explodes many of the myths surrounding the First World War. The First World War killed around eight million men and bled Europe dry. In this provocative book Niall Ferguson asks: was the sacrifice worth it? Was it all really an inevitable cataclysm and were the Germans a genuine threat? Was the war, as is often asserted, greeted with popular enthusiasm? Why did men keep on fighting when conditions were so wretched? Was there in fact a death wish abroad, driving soldiers to their own destruction? The war, he argues, was a disaster - but not for the reasons we think. Far worse than a tragedy, it was the greatest error of modern history. "Must take a permanent place at the top of the War's historiography. It is one of the very few books whose own scale matches that of the events it describes". (Alan Clark, "Daily Telegraph"). "Possibly the most important book to appear in years both on the origins of the First World War...Ferguson can confidently claim to have inherited A. J. P. Taylor's mantle". (Paul Kennedy, "New York Review of Books"). "At one massive stroke, Niall Ferguson has transformed the intellectual landscape". (Economist Niall). Ferguson is one of Britain's most renowned historians. He is Laurence A. Tisch Professor of History at Harvard University, a Senior Research Fellow of Jesus College, Oxford and a Senior Fellow of the Hoover Institution, Stanford University. He is the bestselling author of "Civilization", "The House of Rothschild", "The Pity of War", "The Cash Nexus", "Empire", "Colossus", "The War of the World" and "The Ascent of Money". 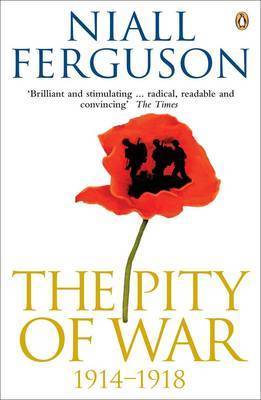 Paperback
The Pity Of War 1914-1918 also appears in these Categories:

A Village in the Third Reich
Julia Boyd
Paperback
€18.75