The Storm Is Upon Us

WITH A NEW AFTERWORD ON WHERE THE MOVEMENT IS HEADING IN A POST-TRUMP, POST-Q WORLD ***** ONE OF THE TELEGRAPH'S BOOKS OF THE YEAR 'A chilling overview of a movement that should arguably have no place in any healthy, well-educated society.' - The Telegraph 'A compelling book.' - The Guardian 'The Storm Is Upon Us is an impressive piece of research and a gripping read. Rothschild's book reads like a thriller, with cliffhangers that leave you eager for the next episode. The trouble, of course, is that it's not fiction.' - The Times 'For anyone who fears that the world really has 'gone mad', this book might be essential reading' - The Telegraph 'An ideal tour guide for your journey into the depths of the rabbit hole that is QAnon, and even shows you a glimmer of light at the exit.' - Cullen Hoback, director of HBO's Q: Into the Storm In 2017, President Trump made a cryptic remark at a gathering of military officials, describing it as 'the calm before the storm'-then refused to explain himself to puzzled journalists. But on internet message boards, a mysterious poster called 'Q Clearance Patriot' began an elaboration all of their own. Q's wild yarn hinted at a vast conspiracy that satisfied the deepest desires of MAGA-America. None of Q's predictions came to pass. But did that stop people from clinging to every word, expanding Q's mythology, and promoting it ever more widely? No. Conspiracy culture expert Mike Rothschild is uniquely equipped to explain QAnon, from the cults that first fed into it, to its embrace by Trump and the right-wing media. With families torn apart and with the Capitol under attack, he argues that mocking the madness of QAnon will get us nowhere. Instead, he argues that QAnon tells us everything we need to know about global fear after Trump-and that we need to understand it now, because it's not going away. 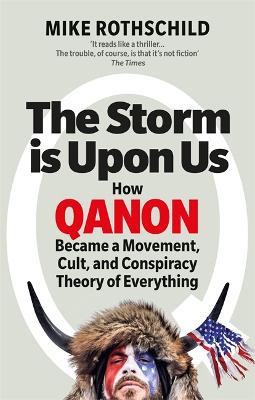 Paperback
The Storm Is Upon Us also appears in these Categories: