"What's this you're writing?... asked Pooh, climbing onto the writing table. "The Tao of Pooh,... I replied. "The how of Pooh?... asked Pooh, smudging one of the words I had just written. "The Tao of Pooh,... I replied, poking his paw away with my pencil. "It seems more like ow! of Pooh,... said Pooh, rubbing his paw. "Well, it's not,... I replied huffily. "What's it about?... asked Pooh, leaning forward and smearing another word. "It's about how to stay happy and calm under all circumstances!... I yelled. "Have you read it?... asked Pooh... ...Winnie-the-Pooh has a certain way about him, a way of doing things that has made him the world's most beloved bear, and Pooh's Way, as Benjamin Hoff brilliantly demonstrates, seems strangely close to the ancient Chinese principles of Taoism. Follow the Pooh Way in this humorous and enlightening introduction to Taoism, with classic decorations by E.H.Shepard throughout. Over a million copies sold to date. This deluxe anniversary edition is a beautiful gift for any fans of this classic title or everyone's favourite bear. 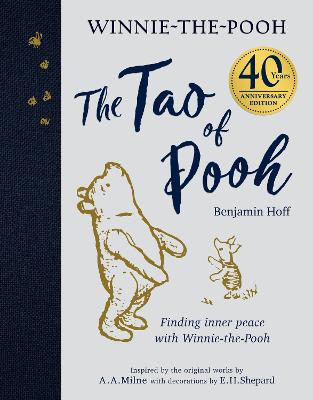 The Boy, The Mole, The Fox and The Horse
Charlie Mackesy
Hardback
€21.25

20% off
Good Vibes, Good Life: How Self-Love Is the Key to Unlocking Your Greatness
Vex King
Paperback
€10.99

The Subtle Art of Not Giving a F*ck Journal
Mark Manson
Paperback
€18.75

Feel the Fear and Do It Anyway
Susan Jeffers
Paperback
€12.50

The Creative Act: A Way of Being
Rick Rubin
Hardback
€31.25

Why We Meditate: 7 Simple Practices for a Calmer Mind
Daniel Goleman
Hardback
€17.99

That Little Voice In Your Head
Mo Gawdat
Paperback
€18.75