The Unfolding Of Language

'Language is mankind's greatest invention - except of course, that it was never invented.' So begins Guy Deutscher's fascinating investigation into the evolution of language. No one believes that the Roman Senate sat down one day to design the complex system that is Latin grammar, and few believe, these days, in the literal truth of the story of the Tower of Babel. But then how did there come to be so many languages, and of such elaborate design? If we started off with rudimentary utterances on the level of 'man throw spear', how did we end up with sophisticated grammars, enormous vocabularies, and intricately nuanced shades of meaning? Drawing on recent, groundbreaking discoveries in modern linguistics, Deutscher exposes the elusive forces of creation at work in human communication. Along the way, we learn why German maidens are neuter while German turnips are female, why we have feet not foots, and how great changes in pronunciation may result from simple laziness... 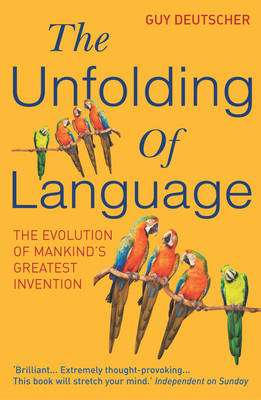 Paperback
The Unfolding Of Language also appears in these Categories:

Do You Know Your Groom?: A Quiz About the Man in Your Life
Dan Carlinsky
€7.40

2.5% off
It's All Greek: Borrowed Words and their Histories
Alexander Tulloch
€15.65

Around the World in 80 Words: A Journey Through the English Language
Paul Anthony Jones
€15.85