The Voyages of Doctor Dolittle

Hugh Lofting's tales of Doctor Dolittle, the kind and eccentric naturalist who can speak with the animals, have been classics of children's literature for a century. The Voyages of Doctor Dolittle has been fully updated for the modern reader by the author's son, Christopher Lofting. Doctor Dolittle, who knows more about animals and birds than anyone in the world, and can even talk to them in their own language, heads for the high seas in another amazing adventure and takes nine-and-a-half-year-old Tommy Stubbins along as his assistant. Narrated by Tommy, Doctor Dolittle and his crew survive a hair-raising shipwreck and land on the mysterious floating Spidermonkey Island. There they meet the incredible Great Glass Sea Snail who holds the key to the biggest mystery of all. A new movie, Dolittle, starring Robert Downey Jr as Dolittle is coming FEBRUARY 2020. Actors lending their voices include Tom Holland, Emma Thompson, Ralph Fiennes, Jumail Nanjiani, Octavia Spencer, Rami Malek, Frances de la Tour and starring in live-action roles are Antonio Banderas, Jim Broadbent and Michael Sheen. 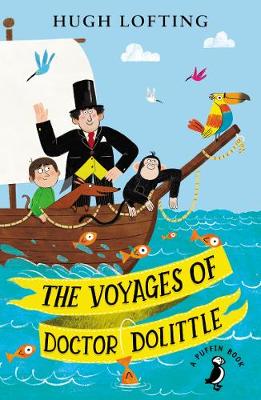 Paperback
The Voyages of Doctor Dolittle also appears in these Categories: