Napoleon Hill, America's most beloved motivational author, devoted 25 years to finding out how the wealthy became that way. After interviewing over 500 of the most affluent men and women of his time, he uncovered the secret to great wealth based on the notion that if we can learn to think like the rich, we can start to behave like them. By understanding and applying the thirteen simple steps that constitute Hill's formula, you can achieve your goals, change your life and join the ranks of the rich and successful.
In this updated edition, Dr. Arthur R. Pell provides examples of men and women who, in recent times, exemplify the principles that Hill promulgated.
With the success stories of top achievers such as Bill Gates and Steven Spielberg, he proves that Hill's philosophies are as valid today as they were then. If you're looking to become the next Bill Gates, this is the book for you. 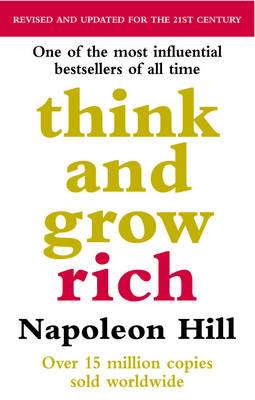 Paperback
Think And Grow Rich also appears in these Categories:

FTSE: The inside story of the revolutionised financial markets
Mark Makepeace
€20.45

How to Make the World Add Up
Tim Harford

How to Make the World Add Up: Ten Rules for Thinking Differently About Numbers
Tim Harford
€24.10

The Narrow Corridor: How Nations Struggle for Liberty
Daron Acemoglu
€15.65

11.5% off
Another Now: Dispatches from an Alternative Present
Yanis Varoufakis
€15.99

The Economists' Hour: How the False Prophets of Free Markets Fractured Our Socie
Binyamin Appelbaum

Less is More: How Degrowth Will Save the World
Jason Hickel
€16.85

The Number Bias: How Numbers Lead and Mislead Us
Sanne Blauw
€18.05

The Deficit Myth Modern Monetary Theory and How to Build a Better Economy
Stephanie Kelton
€18.05

Housing Shock: The Irish Housing Crisis and How to Solve It
Rory (Maynooth University) Hearne
€28.90

The Next Fifty Things that Made the Modern Economy
Tim Harford
€18.05