Three Dublin Plays - Shadow of a Gunman, Juno & The Paycock, Plough & the Stars

The classic plays of the quintessential Dublin playwright Three early plays by Sean O'Casey--arguably his three greatest--demonstrate vividly O'Casey's ability to convey the reality of life and the depth of human emotion, specifically in Dublin before and during the Irish civil war of 1922-23, but, truly, throughout the known universe. In mirroring the lives of the Dublin poor, from the tenement dwellers in "The Shadow of a Gunman" and "Juno and the Paycock" to the bricklayer, street vendor, and charwoman in "The Plough and the Stars," Sean O'Casey conveys with urgency and eloquence the tiny details that create a total character as well as the terrors, large and small, that the constant threat of political violence inevitably brings. As Seamus Heaney has written, "O'Casey's characters are both down to earth and larger than life .
. . His democratic genius was at one with his tragic understanding, and his recoil from tyranny and his compassion for the oppressed were an essential--as opposed to a moral and thematic--part of his art." A new production of "Juno and the Paycock" will transfer from the Donmar Theatre in London to New York in September 2000.
. 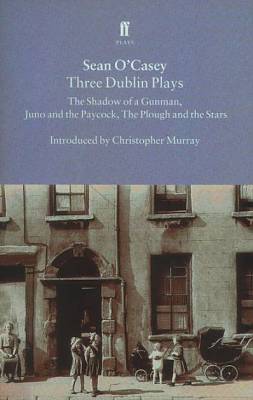 Paperback
Three Dublin Plays - Shadow of a Gunman, Juno & The Paycock, Plough & the Stars also appears in these Categories: