Tales of Country life in the sixties.

The book focuses on Toms memories of growing up in the Carlow townland of Graiguenaspidogue and its mix of fascinating memories and colourful characters, both locals and visitors. Just an ordinary part of the Carlow countryside, it teemed with farm life, decent people, neighbourly helpfulness and enchanting stories.

There were tears and laughter, religion and sex, joy and strife, friendship and rivalry, mischief and mayhem, music and drama, life and death, and the fear of the Telegram Woman. Sadly, the tragic story of the pregnant girl, whose baby was taken from her by the nuns, is rendered even more poignant by last years controversial Mother and Baby Homes Report.

Three Miles of Road is an entertaining collection of stories, with a parade of colourful characters such as By the Wheely Mick, Black Sally, The Hootle Doran and The Russia Man, descriptions of the strange ritual of blowing and a game called Meggars, and the dramatic impact of the assassination of President Kennedy. But above all, Three Miles of Road - Tales of Country Life in the Sixties is Tom Byrnes invaluable contribution to our understanding of Irelands recent past. He uses his sharp powers of observation to convey the energy and sense of life that pervaded his home turf. He paints vivid pictures of a rural community struggling to survive in the bleak Ireland of the sixties, an Ireland that would be unrecognisable today. 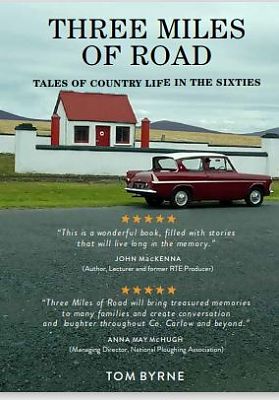 Paperback
Three Miles of Road also appears in these Categories:

The Ticket Collector from Belarus: An Extraordinary True Story of Britain's Only
Mike Anderson
Paperback
€12.50

20% off
A Pocketful of Happiness
Richard E. Grant
Trade Paperback
€14.99

12% off
The Islander: The New and Complete Translation
Thomas O'Crohan
Paperback
€10.99