Patrick O'Brian's Aubrey-Maturin tales are widely acknowledged to be the greatest series of historical novels ever written. To commemorate the 40th anniversary of their beginning, with Master and Commander, these evocative stories are being re-issued in paperback with smart new livery. This is the ninth book in the series.

Uniquely among authors of naval fiction, Patrick O'Brian allows his characters to develop with experience. The Jack Aubrey of Treason's Harbour has a record of successes equal to that of the most brilliant of Nelson's band of brothers, and he is no less formidable or decisive in action or strategy. But he is wiser, kinder, gentler too.

Much of the plot of Treason's Harbour depends on intelligence and counter-intelligence, a field in which Aubrey's friend Stephen Maturin excels. Through him we get a clearer insight into the life and habits of the sea officers of Nelson's time than we would ever obtain seeing things through their own eyes. There is plenty of action and excitement in this novel, but it is the atmosphere of a Malta crowded with senior officers waiting for news of what the French are up to, and wondering whether the war will end before their turn comes for prize money and for fame, that is here so freshly and vividly conveyed. 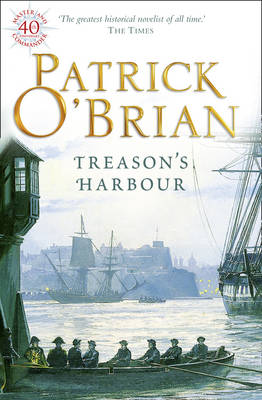