Uganda be Kidding Me

I awoke at 4:45 am in Johannesburg, South Africa, in my bra and underwear and looked over at my lesbian friend Shelly, who was fully clothed in a pair of pajamas. Adult pajamas in general are hard to take seriously; they're even harder to respect when they're worn by a forty-five-year-old woman and the pajamas have pick-up trucks silk-screened all over them. There were six of us being picked up at 9:15 to be flown into the 'bush,' which happened to be the first leg of our safari. The six included my cousin Molly, age twenty-six. She is the younger, white version of Tyler Perry's Madea. Large and in charge. Molly loved animals and wanted to become a zoologist before her parents convinced her to aim lower and work on a reality show. Her birth name is Ulrike because we hail from Nazis, but in an effort to live a peaceful life alongside our Jewish brethren, she chose her middle name-Molly-to use personally and semi-professionally. Accompanying us was my newly divorced sister Simone (I encouraged it). She refers to me often as a relationship-wrecker. Also on the trip was my oldest friend in L.A., Hannah. (She has had different names in all my books, and I simply don't have the energy to reread any of them to find out what the names were.) She too was newly broken up and seemed extremely upbeat about it. The other safari goer was Sue Murphy, who is a co-executive producer on my TV show, Chelsea Lately. Sue would best be described as a female Hunter S. Thompson but with her shit slightly more together. She is the type of person who, finding herself with a bottle of vodka and no glass, will gladly empty the vodka into her bowl of cereal and then proceed to inhale it with a spoon. We refer to her as 'sixty, single, and looking.' She is not even close to sixty, but it makes people go up to her and whisper that she looks great for her age. 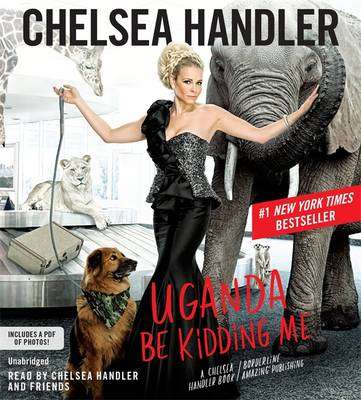 CD
Uganda be Kidding Me also appears in these Categories:

Meditations for Breaking the Habit of Being Yourself
Joe Dispenza
€15.80