For over two centuries, the 'Irish question' has dogged UK politics. Though the Good Friday Agreement carved a fragile peace from the bloodshed of the Troubles, the Brexit process has shown a largely uncomprehending British audience just how uneasy that peace always was - and thrown new light on Northern Ireland's uncertain constitutional status.

Remote from the British mainland in its politics, economy and cultural attitudes, Northern Ireland is, in effect, in an antechamber, its place within the UK conditional on the border poll guaranteed by the peace process.

As shifting demographic trends erode the once-dominant Protestant-Unionist majority, making a future referendum a racing certainty, the reunification of Ireland becomes a question not of if but when - and how.

In this new, fully updated edition of A United Ireland, Kevin Meagher argues that a reasoned, pragmatic discussion about Britain's relationship with its nearest neighbour is now long overdue, and questions that have remained unasked (and perhaps unthought) must now be answered. 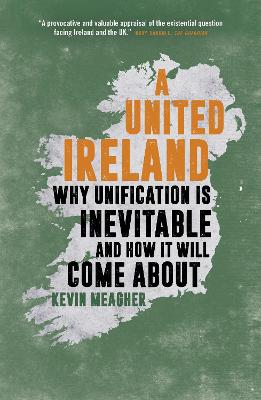 16% off
Making Sense of a United Ireland
Brendan O'Leary
Hardback
€20.99

The Trap: What it is, how is works, and how we escape its illusions
David Icke
Paperback
€18.75

Can Ireland Be One?
Malachi O'Doherty
Trade Paperback
€16.95

Africa Is Not A Country
Dipo Faloyin
Trade Paperback
€18.75

From Russia with Blood: Putin's Ruthless Killing Campaign and Secret War on the
Heidi Blake
Paperback
€12.50

Do Something: Activism for Everyone
Kajal Odedra
Paperback
€12.05

How to Stand Up to a Dictator: Winner of the Nobel Peace Prize 2021
Maria Ressa
Trade Paperback
€18.75

How to Win the War on Truth
Samuel C. Spitale
Paperback
€24.99

No Choice: The Fall of Roe v. Wade and the Fight to Protect the Right to Abortio
Becca Andrews
Trade Paperback
€18.75

Move: How Mass Migration Will Reshape the World - and What It Means for You
Parag Khanna
Paperback
€13.75