When the Dogs Don't Bark: A Forensic Scientist's Search for the Truth

'Fascinating. A book that will be essential reading for every aspiring crime writer' Guardian 'Offers a chilling glimpse into her life's work. Fascinating stuff.' Sunday Times 'Compelling' Daily Mirrror __________ By the time I arrived at the wood yard in Huddersfield on a bitterly cold night in February 1978, the body of the 18-year-old victim had already been taken to the mortuary. __________ Never before has criminal justice rested so heavily on scientific evidence. With ever-more sophisticated and powerful techniques at their disposal, forensic scientists have an unprecedented ability to help solve even the most complex cases. Angela Gallop has been a forensic scientist for over 40 years. After joining the Forensic Science Service, the first crime scene she attended was for a case involving the Yorkshire Ripper. As well as working on a wide range of cases in many countries around the world, she is now the most sought-after forensic scientist in the UK, where she has helped solve numerous high-profile cases, including the investigation that finally absolved the Cardiff Three the Pembrokeshire Coastal Path murders, and the killings of Stephen Lawrence, Damilola Taylor, Rachel Nickell and Roberto Calvi. From the crime scene to the courtroom, When the Dogs Don't Bark is the remarkable story of a life spent searching for the truth. 'Fascinating' The Sun 'a casebook that reads like The Encyclopedia Of Murder' Daily Express 'One of the profession's leading lights' Woman & Home 'The real life Silent Witness' Belfast Telegraph __________ The compelling memoir from the UK's most eminent forensic scientist and some of the most fascinating criminal investigations she has worked on. You learnt about forensic pathology with Dr Richard Shepherd in Unnatural Causes and about anthropology with Professor Sue Black in All That Remains. Now it's time to learn about the scene of the crime. . . 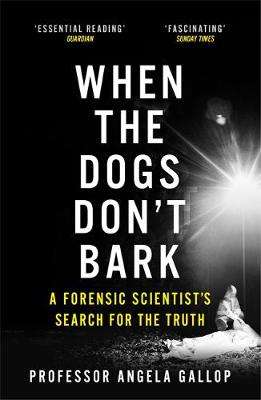 Paperback
When the Dogs Don't Bark: A Forensic Scientist's Search for the Truth also appears in these Categories: