A Bloody Victory: The Irish at War's End

Post D-Day, with the Allies on the newly created Second Front driving fast eastwards beyond Paris, and the Russians on the Eastern Front pressing westwards, the fervour of the fanatical Fascist Nazi Regime remained undiminished. For the Third Reich it was intolerable to believe that they must now concede. Instead of ending the war and suing for peace, the levels of hostility, hatred, and horror heightened, and the brutality, viciousness and terror increased. The resistance to the Allied advances across Europe, first towards, then within, Germany intensified, and every inch of the Fatherland was bitterly contested. With the Allies, in their thousands, were the Irish. A Bloody Victory unearths these people from the corners of Irish history and transports them back to the D-Day beaches and the bridge at Arnhem, to the frozen landscapes at the Battle of the Bulge, the banks of the River Rhine, to the unimaginable horrors of Bergen-Belsen and Buchenwald concentration camps, and finally to the ruinous Battle of Berlin. There was no one individual Irish narrative in the Second World War, but there was a narrative of Irish Individuals, and in A Bloody Victory, Dan Harvey pays due tribute to their significant contribution. 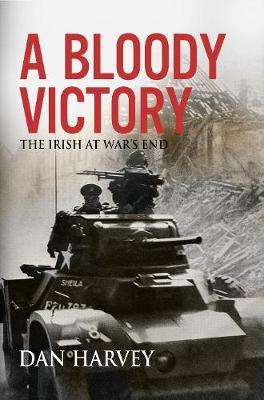 4.5% offPaperback
A Bloody Victory: The Irish at War's End also appears in these Categories:

Fifty Years On: The Troubles and the Struggle for Change in Northern Ireland
Malachi O'Doherty
€12.05

Earthing the Myths: The Myths, Legends and Early History of Ireland and Western
Daragh Smyth
€29.95