All In: The Autobiography of Billie Jean King

An inspiring and intimate self-portrait of Billie Jean King, the champion of equality, that encompasses her brilliant tennis career and unwavering commitment to social justice even as she was engaged in a private struggle to publicly and unequivocally be her true self.

Billie Jean King became a global cultural icon as much for her pioneering activism as her spectacular playing career. Her watershed "Battle of the Sexes" match against Bobby Riggs in 1973 was watched by an estimated 90 million people worldwide. What started for King as a young girl's quest for individual freedom expanded into broader issues over time. The journey tested King to a degree that few people knew.

In this spirited account, King describes the rollicking early days of the pro tennis world she pushed to create, and her evolution into a thirty-nine-time Grand Slam champion, an activist, a feminist and a public figure who was at first so fearful of admitting her sexual identity, and then so closeted once she did, that her physical and emotional health suffered. King recounts the profound impact on her worldview from the civil rights movement, the women's movement, the Cold War, the assassinations and antiwar protests of the 1960s and later, the LGBTQ+ rights movement. She poignantly describes her oft-submerged struggle to be her "authentic self" - the hard-won place where her public and private lives converged, though not until the age of fifty-one, after she narrowly averted financial peril when she was outed and sought in-patient treatment for an eating disorder years later.

All In is a bracingly candid autobiography that reminds us of the scale of King's challenges and triumphs, vision and courage. The result is a transcendent story that situates King in a new context - the here and now - looking backward (and forward) with the benefit of her accumulated wisdom, grace and insights.

"A constant role model in my life, Billie Jean King is a leading example of integrity in the face of adversity. The book's powerfully honest and unapologetic candor is a reflection of King's brilliant mark on the world and the glass ceilings she shattered" - Serena Williams 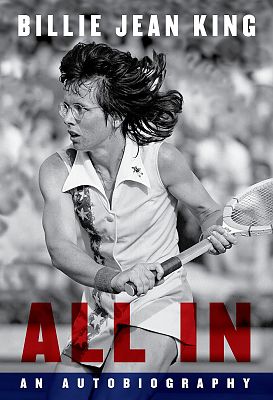 20% offTrade Paperback
All In: The Autobiography of Billie Jean King also appears in these Categories:

Knife in the Fast Lane: A Surgeon's Perspective from the Sharp End of Sport
Bill Ribbans
Hardback
€24.99