Anthony Molloy: An Autobiography: A memoir on life, glory and demons

Anthony Molloy has known the climb to glory and the painful descent.

He famoulsly led Donegal to their first All-Ireland football title when the county defeated Dublin in 1992.

The Ardara clubman played for 12 years in the green and gold, amassing a record total of 123 appearances.

He also became a fixture in the New York GAA scene during thsi time, winning two NY Championships with the Donegal club in the Big Apple, in 1986 and '92.

A holder of three Ulster titles, Molloy was not only team captain, but he dominated in the middle of the field on the team brlliantly built by Brian McEniff during the 1980s and 90s.

Like many successful sportspoeple, he had to face his emons at the end of his career, and with the typical courage of an old he has always done so with a strong and humbling voice. Anthony Molloy is now a member of Donegal County Council representing the Fianna Fail Party. 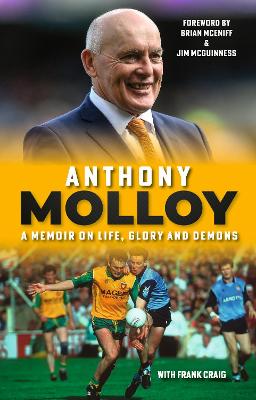 Paperback
Anthony Molloy: An Autobiography: A memoir on life, glory and demons also appears in these Categories:

I Love This Game: The Autobiography
Patrice Evra
Paperback
€12.50