Free the Beasts. Live the Adventure. Battle Beasts and fight Evil with Tom and Elenna in the bestselling adventure series for boys and girls aged 7 and up! Tom and Elenna are celebrating the safe return of Prince Rotu after their successful Quest to rescue him from the Evil Wizard Zargon ... but Evil never rests, and news soon reaches them that Zargon has disappeared and the tombs of the legendary Four Masters have been ransacked. It's time for a new Quest, and this time they must tackle four ancient Beasts in the places they were originally killed. First on the list is Teknos, an armoured turtle-Beast with a razor-sharp beak! There are FOUR thrilling adventures to collect in The Four Masters series - don't miss out! Teknos the Ocean Crawler, Mallix the Silent Stalker, Silexa the Stone Cat and Kyron, Lord of Fire. If you like Beast Quest, check out Adam Blade's other series: Team Hero, Sea Quest and Beast Quest: New Blood! 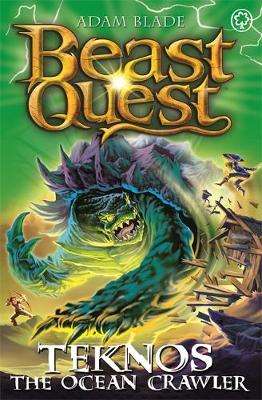