Before He Kills Again

As the sun sets on the bustling streets of Cork city, a young woman lies brutally murdered in her own home.

Former inter-county hurler turned detective Garda Tim Collins, and his new partner Deirdre Dempsey are tasked with solving the case. As they dig deeper, they uncover a sinister plot to attack more women.

Against the clock and with a fierce commitment to stop the violence, Collins and Dempsey race to find the perpetrator before he kills again.

But when one of Ireland's most dangerous criminals shows up in Collins' hometown of West Cork, that case becomes personal.

Witnessing a vicious murder pushes him to the brink.

As the investigation explodes in a brutal showdown, we see a different side of Collins as he questions how far he will go to seek justice. With a strong sense of place and a shocking double climax, this second instalment of the Tim Collins series is a gripping and thrilling read.

Printed on or after 28/02/23. Please note dispatch may take 5-10 days after publication date.
A separate order should be placed for this item. If you order this along with other items, your entire order will be held and despatched when complete. 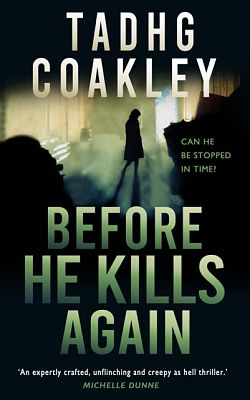 Trade Paperback
Before He Kills Again also appears in these Categories:

11% off
Things We Hide From The Light
Lucy Score
Paperback
€9.99

14% off
The Girl from Donegal
Carmel Harrington
Trade Paperback
€14.99