Soon to be MOOMINVALLEY, a MAJOR ANIMATED SERIES on SKY ONE starring Taron Egerton and Rosamund Pike! A comet is speeding towards Earth and nobody in Moominvalley knows what to do! Will it destroy everything and everyone? Moomintroll decides to find out. So, with Sniff, he sets off on an expedition to ask the Professor if a comet is really on its way to destroy the Earth. On their journey they meet some interesting people - such as Snufkin the super tramp, and the Hemulen who rescues them from an underground tunnel - and have narrow escapes from such menaces as crocodiles and giant lizards! And on their way back Moomintroll meets the beautiful Snork Maiden and is a changed Moomin for ever after. But what about the comet - and is the World Wiped Out?... _____ Tove Jansson was born in Finland in 1914. She began her career as a cartoonist and went on to write and illustrate many books for adults and children. She drew her first Moomin in the 1930s, just for fun, and in 1945 he became a character in a children's story. Tove became world-famous for her Moomin books, which began with The Moomins and the Great Flood, Comet in Moominland and Finn Family Moomintroll. Tove Jansson received many prestigious awards during her lifetime, including the international Hans Christian Andersen Medal. She died in 2001, aged 87. 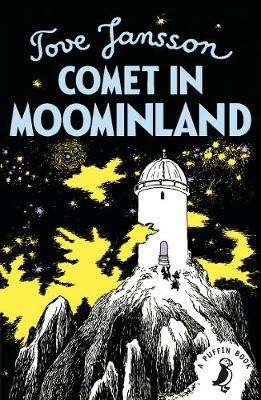 Paperback
Comet in Moominland also appears in these Categories:

The Adventures of Pinocchio
Carlo Collodi
€31.25

The Wind in the Willows: Green Puffin Classics
Kenneth Grahame

The Secret Garden: The Story of the Movie
Linda Chapman
€7.50

Stories From Around the World
Maisie Chan
€7.40

Silver on the Tree: The Dark is Rising sequence
Susan Cooper
€9.65

The Grey King: The Dark is Rising sequence
Susan Cooper
€9.65