The Secret Dead. During the summer of 1566, a girls body is found within the walls of a Neapolitan monastery. Novice monk Giordano Bruno has a habit of asking difficult questions, but this time his investigations may lose him his place in the Dominican Order  or deliver him into the hands of the Inquisition.

The Academy of Secrets. An invitation arrives from a secret society of enlightened philosophers, led by the eccentric Don Giambattista della Porta. Bruno is captivated  even more so when he meets della Portas beautiful niece. But keeping these new heretical secrets soon becomes a matter of life or death.

A Christmas Requiem. When Giordano Bruno is told the pope wants to see him, he fears he may be walking into a trap. The pope is intrigued by Brunos talent for complex memory games, but Rome is a den of intrigue, trickery and blood, and Bruno will be lucky to escape the Eternal City alive. 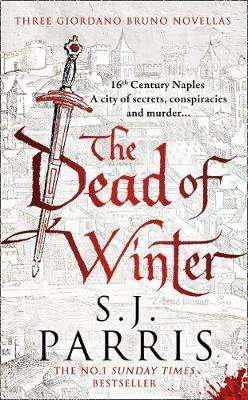 Hardback
Dead of Winter also appears in these Categories:

A Diamond from Tiffany's
Melissa Hill
€9.65

There's No Such Thing as an Easy Job
Tsumura Kikuko
€15.65

Leave the World Behind
Rumaan Alam
€15.65