The life and times of Don Revie - one of the most complex and controversial men ever to grace the game of football. 'Excellent book... an honest and balanced assessment of Don Revie's career' - Johnny Giles, legendary Leeds United midfielder Whenever the greatest managers the game has ever produced are mentioned, names like Busby, Shankly, Paisley and Ferguson trip off the tongue. Despite dominating the game in the late 1960s and '70s there is one name missing: Don Revie, the former Leeds United and England manager. Revie was one of the most complex and controversial men ever to grace the game of football. As a player, he was crowned Footballer of the Year and credited with creating the modern centre-forward. As a manager, he took a Leeds United side languishing in the lower half of the second division and turned them into not only league champions, but one of the most dominant sides in the country. As England manager, Revie lost the magic touch and became increasingly indecisive. After three years in the role and fearing the sack, Revie became the first man to walk out on England. Then came the backlash. Branded a traitor and banned from the game for 10 years, the press declared open season on Revie. Accused of offering bribes to throw matches, his reputation was destroyed. Shunned by the football establishment, he died just 12 years after walking out on England. Revie's death, at the age of 61, robbed him of the opportunity ever to rebuild his reputation as one of the most important figures ever seen in English football. The life and times of this multifaceted, enigmatic, pioneering football man have still never been fully explored and explained in detail before. Featuring new interviews with Johnny Giles, Kevin Keegan, Norman Hunter, Eddie Gray, Allan Clarke, Joe Jordan, Gordon McQueen, Malcolm Macdonald and members of Revie's family, this long-overdue biography reveals how today's football owes so much to Don Revie. 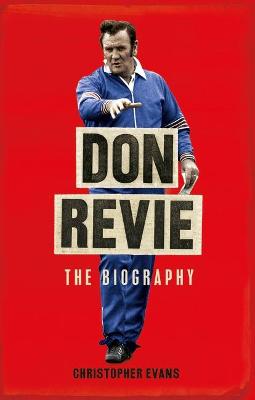 Hardback
Don Revie: The Biography also appears in these Categories: