How the modernist avant-gardes from Dada to constructivism reconceived their roles, working as propagandists, advertisers, publishers, graphic designers, curators and more, to create new visual languages for a radically changed world

"We regarded ourselves as engineers, we maintained that we were building things ... we put our works together like fitters." So declared the artist Hannah Höch, describing a radically new approach to artmaking in the 1920s and '30s. Such wholesale reinvention of the role of the artist and the functions of art took place in lockstep with that era's shifts in industry, technology, and labor, and amid the profound impact of momentous events: World War I, the Russian Revolution, the collapse of the Austro-Hungarian Empire and the rise of fascism. Highlighting figures such as Aleksandr Rodchenko, Liubov Popova, John Heartfield and Fré Cohen, and European avant-gardes of the interwar years--Dada, the Bauhaus, futurism, constructivism and de Stijl--Engineer, Agitator, Constructor: The Artist Reinvented demonstrates the ways in which artists reimagined their roles to create a dynamic art for a new world.

These "engineers," "agitators," "constructors," "photomonteurs," "workers"--all designations adopted by the artists themselves--turned away from traditional forms of painting and sculpture and invented new visual languages. Central among them was photomontage, in which photographs and images from newspapers and magazines were cut, remixed, and pasted together. Working as propagandists, advertisers, publishers, editors, architects, theater designers and curators, these artists engaged with expanded audiences in novel ways, establishing distinctive infrastructures for presenting and distributing their work.

Published in conjunction with a major exhibition, Engineer, Agitator, Constructor marks the transformative addition to MoMA from the Merrill C. Berman Collection, one of the great private collections of political art. Illuminating the essential role of women in avant-garde activities while mapping vital networks across Europe, this richly illustrated book presents the social engagement, fearless experimentation and utopian aspirations that defined the early 20th century, and how these strategies still reverberate today. 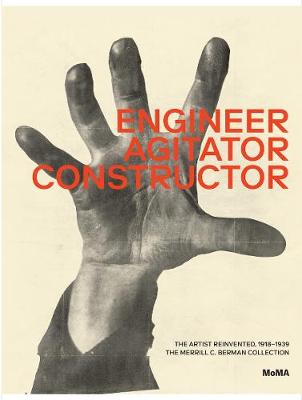 Half Price!Hardback
Engineer, Agitator, Constructor The Artist Reinvented also appears in these Categories:

How to Draw Comics the "Marvel" Way
Stan Lee
Paperback
€16.05

The World According to Colour: A Cultural History
James Fox
Hardback
€30.85

Kew: The Watercolour A to Z of Trees and Foliage
Adelene Fletcher
Paperback
€15.85

Signs & Symbols: An illustrated guide to their origins and meanings
Miranda Bruce-Mitford
Hardback
€24.70

The Illustrated Story of Art
Hardback
€30.85

39% off
Liturgical Calendar for Ireland 2021
National Secretarial for Liturgy
Calendar
€7.50

86% off
Seraph Of The End: Guren Ichinose, Resurrection At Nineteen
Takaya Kagami
Paperback
€2.00

82% off
Murder At The Opera: An Atlas Catesby Mystery
D.M. Quincy
Hardback
€5.00

Half Price!
Where's My Guitar?: An Inside Story of British Rock and Roll
Bernie Marsden
Hardback
€10.00

88% off
The Cheffe: A Culinary Novel
Marie NDiaye
Trade Paperback
€2.00

82% off
Kopp Sisters on the March
Amy Stewart
Paperback
€2.00