Essays By An Irish Rebel

Essays by an Irish Rebel: Revolution, Politics and Culture (Liam Ó Briain) (1888  1974) have been translated from Irish by Eoin Ó Dochartaigh.

O Briain was a well-known figure in Irish public life. He fought in the Easter Rising of 1916 as an Irish volunteer and endured imprisonment in the aftermath. After his detention he was appointed Professor of Romance Languages at UCG where he lectured for forty years. He had also travelled in Europe between 1911 and 1914 on a scholarship from NUI. He was a target of the Tans in Galway during the War of Independence and was again imprisoned.

He was a founding member of An Taibhdhearc and was one of their directors for ten years from 1928.

This book includes profiles of friends who were to become notable figures in modern Irish history. Friends like Eoin Mac Néill, Pádraic Ó Conaire, Arthur Griffith, Seán T O Kelly, Pádraig de Brún, Piaras Béaslaí and WT Cosgrave. The 25 essays end with a flourish  a learned lecture in Irish by Liam on RTÉ at Christmas 1957 on the Irish in the Chansons de Geste, which later appeared in Comhar. Appreciations of Liam by Proinsias Mac Aonghusa, Seán Mac Réamoinn and Art Ó Beoláin appeared in Feasta and are included in the book. 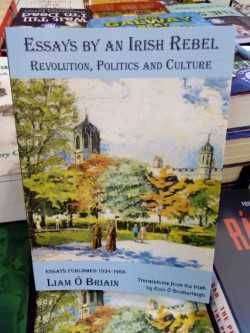 Paperback
Essays By An Irish Rebel also appears in these Categories: