Everything I Need to Know I Learned in the Twilight Zone: A Fifth-Dimension Guid

Can you live your life by what The Twilight Zone has to teach you? Yes, and maybe you should. The proof is in this lighthearted collection of life lessons, ground rules, inspirational thoughts, and stirring reminders found in Rod Serling's timeless fantasy series.

The notion that "it's never too late to reinvent yourself" soars through "The Last Flight, '' in which a World War I flier goes forward in time and gets the chance to trade cowardice for heroism. A visit from an angel blares out the wisdom of "follow your passion" in "A Passage for Trumpet." The meaning of "divided we fall" is driven home with dramatic results when neighbors suspect neighbors of being invading aliens in "The Monsters Are Due on Maple Street." The old maxim about never judging a book by its cover is given a tasty twist when an alien tome is translated in "To Serve Man."

An unauthorized tribute, Everything I Need to Know I Learned in the Twilight Zone, written by veteran TV critic Mark Dawidziak, is a celebration of the classic anthology show; but also, on another level, a kind of fifth-dimension self-help book, with each lesson supported by the morality tales told by Serling and his writers. 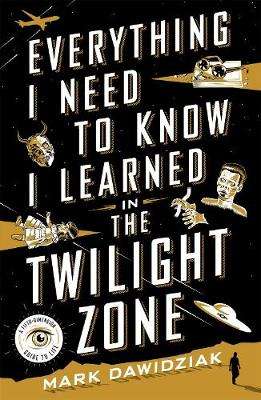 Paperback
Everything I Need to Know I Learned in the Twilight Zone: A Fifth-Dimension Guid also appears in these Categories:

Mentor to Millions: Secrets of Success in Business, Relationships, and Beyond
Harrington Kevin
€19.25

An Introduction to Improving Your Self-Esteem, 2nd Edition
Leonora Brosan
€7.20

It's Not Your Money: How to Live Fully from Divine Abundance
Tosha Silver
€15.65

Bliss Brain: The Neuroscience of Remodeling Your Brain for Resilience, Creativit
Dawson Church
€26.50

How to Be Hopeful
Bernadette Russell
€15.65

How to Be Yourself: Life-Changing Advice from a Reckless Contrarian
Simon Doonan
€11.99

The Power of Rude: A woman's guide to asserting herself
Rebecca Reid
€16.85