'Being asked to write about Kafka is like being asked to describe the Great Wall of China by someone who's standing just next to it. The only honest thing to do is point.' Joshua Cohen, from his preface to He: Shorter Writings of Franz Kafka This is a Kafka emergency kit, a congregation of the brief, the minor works that are actually major. Joshua Cohen has produced a frame that refuses distinctions between what is a story, a letter, a workplace memo and a diary entry, also including popular favourites like The Bucket Rider, The Penal Colony and The Burrow. Here we see Kafka's preoccupations in writing about animals, messiah variations, food and exercise, each in his signature style. Cohen's selection emphasises the stately structure of utterly coherent logic, within an utterly incoherent illogical world, showing how Kafka harnessed the humblest grammar to metamorphic power until the predominant effect ceases to be the presence of an unreliable narrator, but the absence of the universe's only reliable narrator. Who is God. 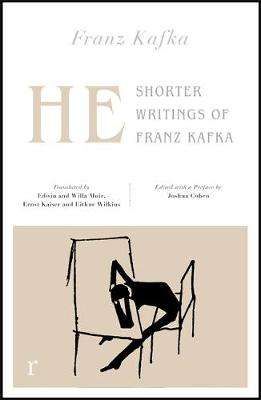 The Memoir of an Anti-Hero
Kornel Filipowicz