I Named My Dog Pushkin (And Other Immigrant Tales)

'Witty and acerbic...A delight!' Jen Mann 'Hilarious...Thought-provoking' California Bookwatch Buy a pair of Levi's, lose the Russian accent, and turn yourself into an American. Really, how difficult could it be? Fake an exit visa, fool the Soviet authorities, pack enough sausage to last through immigration, buy a one-way Aeroflot ticket, and the rest will sort itself out. That was the gist of every Soviet-Jewish immigrant's plan in the 1980s, Margarita's included. Despite her father's protestations that they'd get caught and thrown into a gulag, she convinced her family to follow that plan. When they arrived in the US, Margarita had a clearly defined objective - become fully American as soon as possible, and leave her Soviet past behind. But she soon learned that finding her new voice was harder than escaping the Soviet secret police. She finds herself changing her name to fit in, disappointing her parents who expect her to become a doctor, a lawyer, an investment banker and a classical pianist - all at the same time, learning to date without hang-ups (there is no sex in the Soviet Union), parenting her own daughter 'while too Russian', and not being able to let go of old habits (never, ever throw anything away because you might use it again). Most importantly, she finds that no matter how hard you try not to become your parents, you end up just like them anyway. Witty, sharp and unflinching, I Named My Dog Pushkin will have fans of Samantha Irby and Jenny Lawson howling with laughter at Margarita's catastrophes, her victories and her near misses as she learns to grow as both a woman and an immigrant in a world that often doesn't appreciate either. What readers are saying about I Named My Dog Pushkin: 'I thoroughly enjoyed Margarita's witty and acerbic voice. This book was a delight!' Jen Mann, New York Times bestselling author of People I Want to Punch in the Throat 'Hilarious and thought-provoking...A fine way of understanding the special challenges of the immigrant experience' California Bookwatch 'I loved this book so much...I just could not stop reading. I loved everything in this book.' NetGalley reviewer 'A sharp, witty memoir...Margarita captured Jewish joy and grief together perfectly' Goodreads reviewer 'What a delightful book...Margarita gives us good look behind the Iron Curtain that alternates between serious, funny and sweet' Goodreads reviewer 'Darkly funny...reminiscent of other acerbic comedian authors like Sara Barron...fascinating' NetGalley reviewer 'Gokun Silver treats her journey with humor and an eye for cultural details...an engaging read...an eye-opener...Many of the stories Gokun Silver shares about her parents acclimating to American life will ring true to any first or second-generation immigrant family. Definitely worth a read!' NetGalley reviewer 'A welcome addition to this genre from a female perspective.' NetGalley reviewer 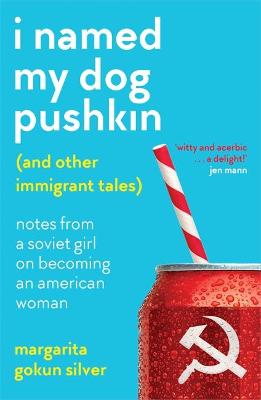 Paperback
I Named My Dog Pushkin (And Other Immigrant Tales) also appears in these Categories:

How to (Almost) Make Friends on the Internet
Michael Cunningham
Hardback
€12.35

What Not to Say to Your Husband
Jason Hazeley
Hardback
€11.99

101 Things to Do With a Retired Man
Gabrielle Mander
Hardback
€11.10

What Would Spider-Man Do?: A super hero's guide to everyday life
Susie (Editor) Rae
Hardback
€9.85

19% off
Don't Laugh, It Will Only Encourage Her
Daisy May Cooper
Trade Paperback
€14.99