Into Darkness: The Children of D'Hara, episode 5

Into Darkness is the fifth episode in Terry Goodkind's new serial novel, The Children of D'Hara. Told in irresistibly intense instalments, this is the story of a world confronted by an apocalyptic nightmare. The insatiable hunger of Golden Goddess... The irresistible power of a Witch's Oath... A fracture in the world of life... An opening in the world of death... Richard Rahl and Kahlan Amnell face the perfect storm. 'I want to introduce everyone to THE CHILDREN OF D'HARA, a new series that continues the story of the lives of Richard and Kahlan. This is a journey that began 25 years ago with the 1994 release of WIZARD'S FIRST RULE, when Richard first met Kahlan that fateful day in the Hartland woods. After the 'The Sword of Truth' series ended, I knew there was more to Richard and Kahlan's story. Much more. A whole world more. For years, readers have asked me about Richard and Kahlan's lives after the Sword of Truth series . . . and importantly, about their children. While my masterwork, 'The Sword of Truth,' concluded with WARHEART - 20 languages and 26 million books sold - I was burning to tell readers more about Richard and Kahlan. For that reason, this new series starts immediately after the 'Sword of Truth' books ended. Without skipping a beat, readers will plunge back into Richard and Kahlan's lives, with new episodes releasing every three months. So it is that I want to welcome you all back into the Sword of Truth world with many of the characters besides Richard and Kahlan, such as the Mord-Sith, that we have come to love. Learn what the star shift has done to their world and what monsters now lurk in shadows. I promise an arresting, beautiful, and sometimes tragic adventure that will keep you glued to this irresistible story.' - Terry Goodkind. 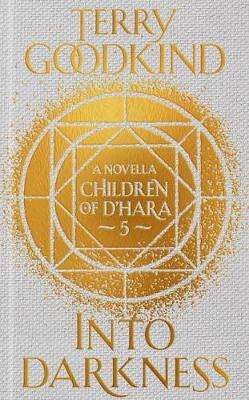 Hardback
Into Darkness: The Children of D'Hara, episode 5 also appears in these Categories: