Into Every Generation a Slayer is Born: How Buffy Staked Our Hearts

Over the course of its seven-year run, Buffy the Vampire Slayer cultivated a loyal fandom and featured a strong, complex female lead, at a time when such a character was a rarity. Evan Ross Katz explores the show's cultural relevance through a book that is part oral history, part celebration, and part memoir of a personal fandom that has universal resonance still, decades later. Katz-with the help of the show's cast, creators, and crew-reveals that although Buffy contributed to important conversations about gender, sexuality, and feminism, it was not free of internal strife, controversy, and shortcomings. Men-both on screen and off-would taint the show's reputation as a feminist masterpiece, and changing networks, amongst other factors, would drastically alter the show's tone. Katz addresses these issues and more, including interviews with stars Sarah Michelle Gellar, Charisma Carpenter, Emma Caulfield, Amber Benson, James Marsters, Anthony Stewart Head, Seth Green, Marc Blucas, Nicholas Brendon, Danny Strong, Tom Lenk, Bianca Lawson, Julie Benz, Clare Kramer, K. Todd Freeman, Sharon Ferguson; and writers Douglas Petrie, Jane Espenson, and Drew Z. Greenberg; as well as conversations with Buffy fanatics and friends of the cast including Stacey Abrams, Cynthia Erivo, Lee Pace, Claire Saffitz, Tavi Gevinson, and Selma Blair. Into Every Generation a Slayer Is Born engages with the very notion of fandom, and the ways a show like Buffy can influence not only how we see the world but how we exist within it. 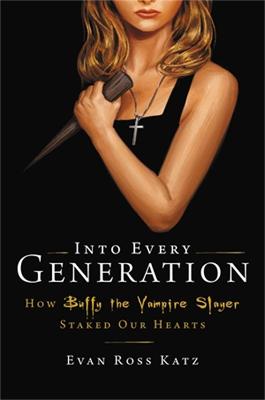 Hardback
Into Every Generation a Slayer is Born: How Buffy Staked Our Hearts also appears in these Categories:

A Little Book About Movies: Quotes for the Cinephile in Your Life
Orange Hippo!
Hardback
€7.50