Kenmare is one of Kerry's finest towns. The district's complex and sometimes violent past is an intrinsic part of Ireland's history.

Colum Kenny tells the story of Gaelic chieftains, English settlers and determined local people who have made Kenmare what it is today. The story features a cast of notable characters including Sir William Petty, the 'souper' Yellow Kate and even Oscar Wilde.

At the book's heart is the remarkable Fr John O'Sullivan, a priest who worked with the local pool and lobbied on their behalf in London. By mining the records of Kenmare workhouse and O'Sullivan's unpublished journals, among other sources, Kenny paints a vivid picture of what life was like for so many in Ireland during the Great Famine.

Kenny presents a robust challenge to the English historian Thomas Babington Macaulay's account of Kenmare's past, in which he described the Kerry people as 'savages'. The author shows how O'Sullivan made the case for Kenmare to British civil servants, MPs and millionaire city bankers. He describes a bitter religious feud that ended with the death of a local landlord, and devotes a special chapter to women in Kenmare's past. 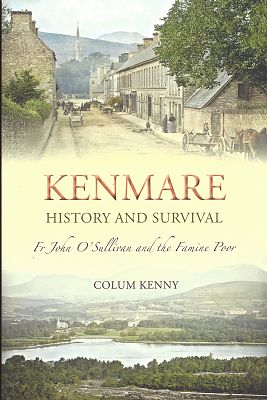 Paperback
Kenmare History and Survival also appears in these Categories: