O'Mahony's Booksellers stars on the brand new official Limerick MONOPOLY board alongside the great and the good of Limerick, including The Hunt Museum, Munster Rugby and King John's Castle. In all 22 Limerick landmarks feature on their very own MONOPOLY multi-coloured prime real estate on the brand new board, with the Chance and Community Chest playing cards customised too. One penalises players for damaging the Picasso that hangs proudly at The Hunt Museum. Another pays players for brushing up on the history of The Treaty Stone.

Is there anybody left who doesn't know how to play Monopoly? Move around the board, buying and selling property. Build houses and hotels on your property and charge other players rent when they land on your locations. Sit back and accumulate a fortune from your property empire, but watch out, avoid taxes, jail or going bankrupt! Cities, towns, counties and now, even football clubs are celebrated through these special editions of this classic family game. Featuring many of the region's most famous landmarks and cultural icons, they make wonderful gifts, souvenirs of a trip, or great family fun with a local flavour. This special version is based around Limerick.


*Fun for children and adults alike
*Suitable for everyone over the age of 8
*Roll the dice to begin your property building empire in this new version of Monopoly! 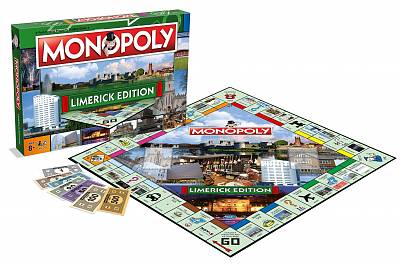