Masters of Make-Up Effects: A Century of Practical Magic

Dive into the fascinating world of movie make-up effects with this stunning illustrated oral history of the art form. Masters of Make-Up Effects is a celebration of make-up artists and acclaimed make-up effects from the world of film and television. Authors Howard Berger and Marshall Julius have gleaned untold stories from the sets of cult classics (Planet of the Apes, An American Werewolf in London, The Thing), fan-favourite film and TV franchises (Star Trek, Star Wars, Harry Potter and the MCU) and modern blockbusters like Dune to chart the fascinating evolution of an industry. Lavishly illustrated with hundreds of behind-the-scenes photos, many of which have never before been seen in print or on social media, it showcases some of the most iconic make-up effects of all time, while revealing how they came to be in the artists' own words. Featuring a foreword by Guillermo del Toro, an afterword by Seth MacFarlane, and contributions from more than 50 make-up effects legends, as well as iconic actors including Doug Jones, Robert Englund, James McAvoy and Doug Bradley, and directors Mick Garris and John Landis, Masters of Make-Up Effects is the most complete book on movie make-up history ever assembled, and a must read for cinema fans everywhere. 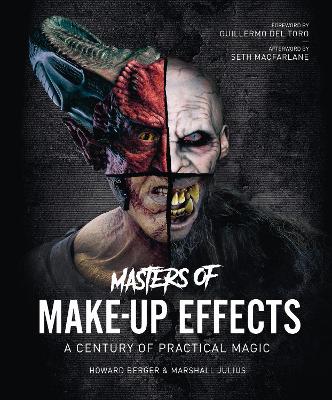 20% offHardback
Masters of Make-Up Effects: A Century of Practical Magic also appears in these Categories:

28% off
Ghibliotheque: The Unofficial Guide to the Movies of Studio Ghibli
Michael Leader
Hardback
€18.00

36% off
Woke Up This Morning
Michael Imperioli
Paperback
€7.99

23% off
The Extraordinary Life of an Ordinary Man
Paul Newman
Hardback
€23.99

20% off
Inside Bridgerton
Shonda Rhimes
Hardback
€25.00

20% off
You've Got Red on You: How Shaun of the Dead Was Brought to Life
Clark Collis
Paperback
€14.00

20% off
Godzilla: The Official Guide to the King of the Monsters
Toho Co. Ltd
Hardback
€30.00

20% off
Star Wars Be More Obi-Wan: Navigate Your World with Wit and Wisdom
Kelly Knox
Hardback
€7.99

20% off
Into Every Generation a Slayer is Born: How Buffy Staked Our Hearts
Evan Ross Katz
Hardback
€19.99

20% off
The Art of Star Wars: The Mandalorian (Season Two)
Phil Szostak
Hardback
€30.00