Excelsior Award White, for students aged 9 and over (Key Stage 2)

A young boy gets the opportunity of a lifetime when he bonds with a giant sentient robot and joins the ranks of the illustrious Sky Corps Academy to protect the world from alien threats. Every year, giant sentient robots from outer space come to Earth and bond forever with a brand new crop of cadets at Sky Corps Academy to help keep the planet safe. But this year, instead of making a connection with a cadet, one of the mechs bonds with Stanford, a young kid working with his Mom as a janitor at Sky Corps. Stanford has the opportunity of a lifetime but he'll first have to earn the trust of his classmates if he's to defend the planet from the monstrous Sharg. From bestselling author Greg Pak (The Hulk, Superman) and fan favorite artist Takeshi Miyazawa (Runaways, Ms. Marvel), Mech Cadet Yu is a heartfelt underdog story set in a bright and bold sci fi world, uncovering the true makings of heroism and friendship in the face of overwhelming odds. This collection includes an exclusive behind-the-scenes look at the making of Mech Cadet Yu, including the comic short story that inspired the series. 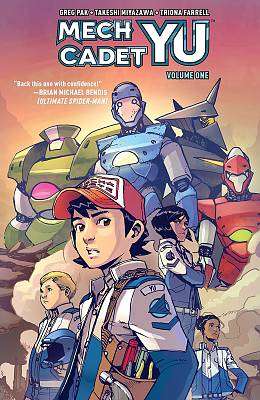 Heroes in Crisis: The Price and Other Tales
Joshua Williamson
€19.25

House of El Book One: The Shadow Threat
Claudia Gray
€15.65

Adventureman, Volume 1: The End and Everything After
Matt Fraction
€27.70

The Boy Who Lied
Kim Slater