The Mizen Head (Irish: Carn Uí Néid), the most southerly point of the irish mainland, has been the location for countless dramatic episodes in Irish maritime history. Numerous shipwrecks in the area led to the construction of the magnificent Fastnet Rock Lighthouse (replacing a lighthouse built in 1854 that could not withstand the power of the ocean).

Perched on a rock 6.5 kilometres southwest of Cape Clear Island, County Cork, it took eight years to build, and first displayed its light in 1904. The iconic granite tower rises to 54 metres, and is the tallest lighthouse on the irish coast. The world-famous annual Fastnet Yacht Race goes round the rock before the sailors head back to the isle of Wight 550 kilometres away.

Overlooking the Fastnet Lighthouse, the Mizen Head Fog-Signal Station was built in 1909. Located on an island separated from the mainland by just 52 metres, acces to the station is by footbridge 45 metres above the sea. Because Mizen Head was established as a fog-signal station, it remained without a light until 1959, when a buoy lantern was launched.

Today, the fog-signal station is a very popular visitor centre called the Mizen Vision, and the area is renowned for whale-watching.

Suitable for all ages and fun for all the family. 50 x 34 cm. Illustrated by William Helps. Made in Ireland. 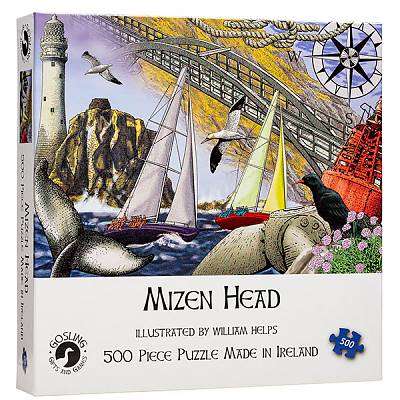