Obedience to Authority: An Experimental View

A part of Harper Perennial's special "Resistance Library" highlighting classic works that illuminate our times: A special edition reissue of Stanley Milgram's landmark examination of humanity's susceptibility to authoritarianism. "The classic account of the human tendency to follow orders, no matter who they hurt or what their consequences." - Washington Post Book World In the 1960s, Yale University psychologist Stanley Milgram famously carried out a series of experiments that forever changed our perceptions of morality and free will. The subjects-or "teachers"-were instructed to administer electroshocks to a human "learner," with the shocks becoming progressively more powerful and painful. Controversial but now strongly vindicated by the scientific community, these experiments attempted to determine to what extent people will obey orders from authority figures regardless of consequences. "Milgram's experiments on obedience have made us more aware of the dangers of uncritically accepting authority," wrote Peter Singer in the New York Times Book Review. With an introduction from Dr. Philip Zimbardo, who conducted the famous Stanford Prison Experiment, Obedience to Authority is Milgram's fascinating and troubling chronicle of his classic study and a vivid and persuasive explanation of his conclusions. 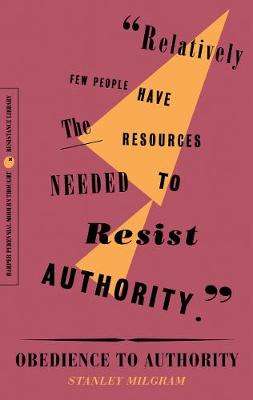 5% offPaperback
Obedience to Authority: An Experimental View also appears in these Categories:

Our Minds, Our Selves: A Brief History of Psychology
Keith Oatley
€21.25

Happy Ever After: Escaping Our Judgements about the Perfect Life
Paul Dolan
€12.35

The Four Thoughts That F*ck You Up ... and How to Fix Them: Rewire how you think
Daniel Fryer
€16.25

Why Are We Yelling: The Art of Productive Disagreement
Buster Benson
€18.50

3.5% off
The Genius Checklist: Nine Paradoxical Tips on How You Can Become a Creative Gen
Dean Keith Simonton
€16.85

Talking to Strangers: What We Should Know about the People We Don't Know
Malcolm Gladwell
€24.99

3.5% off
An Introduction to Counselling and Psychotherapy:Theory, research and practice
John Mcleod
€44.55

4.5% off
Farsighted: How We Make the Decisions that Matter the Most
Steven Johnson
€13.10