Once Upon a Road: The History and Times of an Irish Butter Road

A road trip through the past best describes this book.

Once Upon a Road by County Kerry native and former Mayor of Limerick, Joe Harrington, stretches to 364 full colour pages and 315 images, maps and photos in its account of the very first Butter Road to the Cork Butter Market. It is described as a search for the olden days on a sixty-mile journey through 275 years of time.

Once Upon a Road tells the story of the Turnpike built from Listowel through Lyreacrompane, Castleisland, Cordal, Millstreet, Aubane, Vicarstown, to Kerry Pike outside Cork City. It was constructed under a 1747 Act of Parliament by a Castleisland man, John Murphy, who, for 61 years, had the right to place six toll gates at different points on the turnpike road. The story of the road first appeared in a song by Joe entitled The Road John Murphy Made which won the long-established Sean McCarthy Ballad Competition. The ballad was about one mans trip on the road in the 1750s and the book broadens the story. Every mile on The Road John Murphy Made tells its own tale and along the way the reader will meet Whiteboys and Hedge Schoolmasters, Freedom Fighters and Moonlighters, Famines and Natural Disasters, Mass Rocks and Wedge Tombs, Bronze age hoards and Bog Butter, Lost Estates and Evicted Tenants  and the part played by the road in the slave trade.

Once Upon a Road dips into the local history of the townlands, towns, villages and settlements through which the road passes. Although about a road from Kerry to Cork, Limerick is featured extensively in relation to its experience of toll roads in the 1700s, the Citys role in the slave trade and the west Limerick Whiteboy rebellion of 1822. It also covers the activities of Brigadier Levison, who was deployed to Kerry by Ginkell to deal with any threat from there and to commandeer grain and cattle to feed the Williamite army whose focus was its siege of Limerick  an event in the living memory of those who built the road.

The story in this book connects local history in an intriguing way with the bigger events in national and international history. 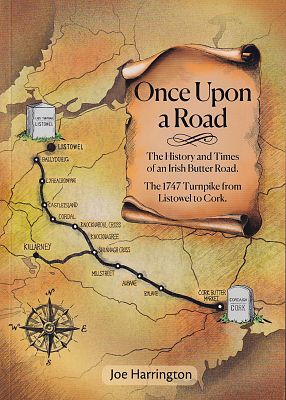 Paperback
Once Upon a Road: The History and Times of an Irish Butter Road also appears in these Categories:

The Poster and Other Stories
O'Shaughnessy Denis
Trade Paperback
€18.00