One Flew Over Thomond Bridge

Emerging from the outstanding success of her tenth publication, Ten Lamb Chops for a Pound, Limerick writer, Maureen Sparling has embarked on what promises to be yet another winner. Comprising of a novella, where we meet a family overwhelmed with greed, a number of short stories where the reader will encounter a black-shawled Kilkee native who believes that one day her only son, believed to be drowned, will one day return as foretold in a dream. You will meet a band of leprechauns who, disappointed with the Bard's negative aspersions on 'their clan' set out to capture him.

Between these pages you will also become acquainted with a undertaker of devious practices, as well as a heartfelt story entitled "Enduring Love", that will pull at the heart strings of even the most stoic among us. Also coming to light in this publication is the mysterious experience of an elderly couple on All Souls Eve. Then again you will two beggars who are slighted by the so-called upper echelons of society and ended up astounding the citizens with superb organ playing in the local Cathedral. You will empathise with the misfortunate journalist who possesses information on a certain court he dare not publish for fear of losing his beloved.

Quite a few poems also feature in this publication, such as 'September Morn', 'The Roguish Black Crows Down at City Hall', 'Stories of the Wind'. 'Clare Glens on a November Morn', 'Linchpin of Life' and many more.

All in all, this publication portrays the versatility of the author who continues to maintain that solid simplistic became evident in her debut publication Echoes of Old Limerick, back in 1991.

The front cover illustration, like the fine drawings throughout the book is the work of Limerick artist Patrick Collins. 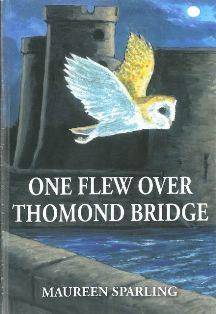 Paperback
One Flew Over Thomond Bridge also appears in these Categories:

A Year of the Banner
Kevin Haugh
Paperback