Overreach: Inside Story of Putin's War Against Ukraine

An astonishing investigation into the start of the Russo-Ukrainian war  from the corridors of the Kremlin to the trenches of Mariupol.

The Russo-Ukrainian War is the most serious geopolitical crisis since the Second World War  and yet at the heart of the conflict is a mystery. Vladimir Putin apparently lurched from a calculating, subtle master of opportunity to a reckless gambler, putting his regime  and Russia itself  at risk of destruction. Why?

Drawing on over 25 years experience as a correspondent in Moscow, as well as his own family ties to Russia and Ukraine, journalist Owen Matthews takes us through the poisoned historical roots of the conflict, into the Covid bubble where Putin conceived his invasion plans in a fog of paranoia about Western threats, and finally into the inner circle around Ukrainian president and unexpected war hero Volodymyr Zelensky.

Using the accounts of current and former insiders from the Kremlin and its propaganda machine, the testimony of captured Russian soldiers and on-the-ground reporting from Russia and Ukraine, Overreach tells the story not only of the wars origins but how the first six months unfolded.

With its panoramic view, Overreach is an authoritative, unmissable record of a conflict that shocked Europe to its core. 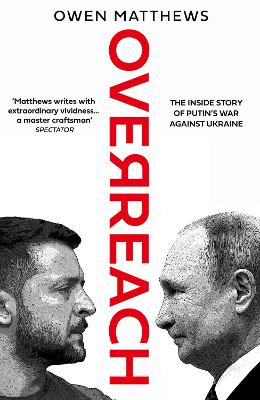 15% offTrade Paperback
Overreach: Inside Story of Putin's War Against Ukraine also appears in these Categories:

25% off
Trust the Plan: The Rise of QAnon and the Conspiracy That Reshaped the World
Will Sommer
Trade Paperback
€13.99

Foolproof: Why We Fall for Misinformation and How to Build Immunity
Sander van der Linden
Paperback
€21.25

Defeating the Dictators: How Democracy Can Prevail in the Age of the Strongman
Charles Dunst
Trade Paperback
€21.25